THE ANNUAL ART WALK IS BACK! 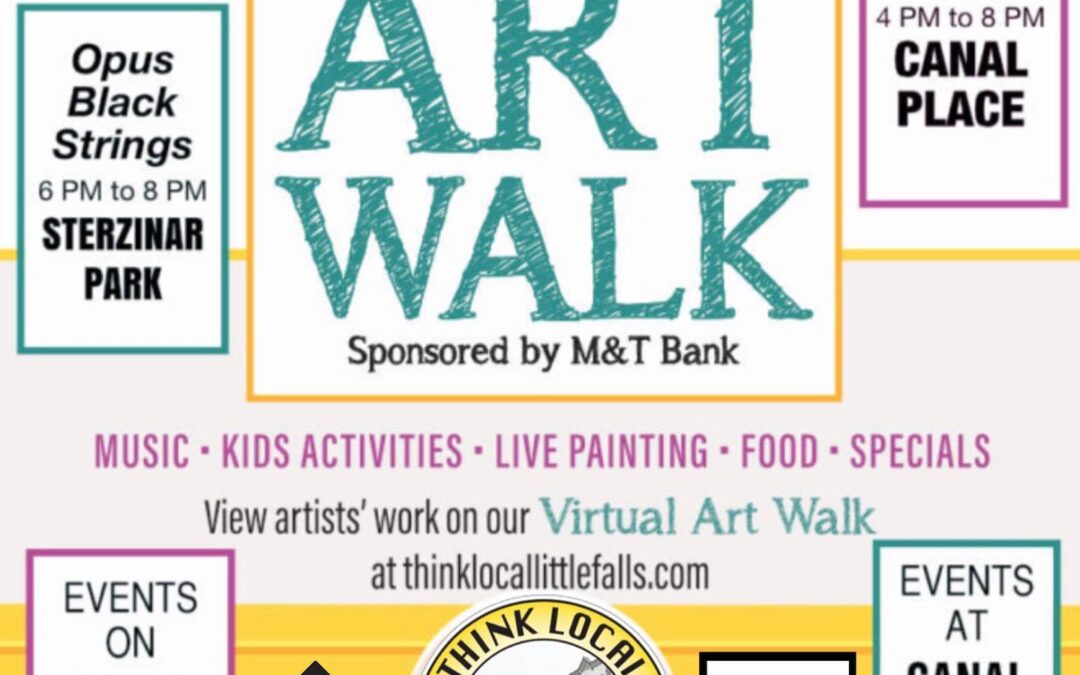 MVCA is pleased to partner with Think Local Little Falls to help bring back this popular Third Thursday event.  Several featured artists will be present to  discuss their artwork on display.  Other artists will be painting live on Main Street and in Canal Place. MVCA’s 401 Gallery and Selective Eye shop will be open through 8PM.

Sculptor Edwin Falk will be on hand in the 401 Gallery at 5PM to kick off his month-long exhibition, “Humorous Ferrous,” with his artist’s talk scheduled for 5:30PM.  Falk’s oversized creative sculptures made from rusty, repurposed machinery parts will form an imaginative exhibit both inside the gallery and outside in the garden.  Just across the street, Garlyn MaGinnis will be the featured artist in the Inn at Stone Mill’s lobby on the second floor.  MaGinnis finds inspiration in brooding clouds and mood weather, stating her abstract impressionistic landscapes “are not as much about the physical places themselves as much as they are about the energy of the land and the feelings evoked by those places.”  Live painting demonstrations in Canal Place include artists Lutz Scherneck outside the Stone Mill and Bruce Schwabach on the sidewalk beyond MVCÅ.

Featured artist Oscar Stivala will be present in the lobby at Rock City Centre, 690 East Main Street.  Stivala is a retired surgeon who practiced for 35 years, and now pursues his artistic endeavors in his hometown of Little Falls, NY.  A native of Argentina, he was exposed to music as a child through his father’s folk guitar playing and Stivala began to play trumpet at the age of nine. Throughout his school and college years he played with several bands, but he ultimately found his true musical calling in improvisational jazz. His interest in the visual arts also began in childhood with a passion for sketching, but it wasn’t until adulthood that he began formal training. Influenced greatly by the Impressionists, his art eventually blossomed into marble and wood sculptures, as well as the bold, colorful sculptural paintings Stivala is known for today. In addition to still lifes and portraits, his paintings frequently depict his beloved world of jazz and its masters.

Works by featured artist Donna Veeder will also be on display at Rock City Centre.  Veeder was born and raised in Nashville, where she began drawing at an early age.  She studied Commercial Art at Hume-Fogg Technical School in Nashville, and her first figure drawing study was at Watkins Institute, also in Nashville.  Veeder later attended the University of Georgia, graduating with a BFA degree.  After moving to the Mohawk Valley region, she began post-graduate work at Munson-Williams-Proctor School of Art and studied figure/portrait painting, leading to a life-long love of painting portraits.  Veeder was an itinerant portrait painter for seventeen years in Central NY.  She taught in area public schools, as well as teaching adult classes at MVCA for many years.  Her work has been shown locally and nationally, winning prizes over the years.

Be sure to pick up an Art Walk brochure or visit Think Local Little Falls website or Facebook page for complete details.

Join our mailing list to receive the latest news and updates from the Mohawk Valley Center for the Arts.

You have Successfully Subscribed!